From Instinct to Rational Control

"From Instinct to Rational Control" is the fourth episode of Season 4 of Orphan Black. The episode was watched by 0.218 viewers.[1]

Sarah realizes her goals have aligned with her once enemy and forms a precarious alliance in hopes of getting to the head of Neolution. Meanwhile, on her end, Alison dispatches Felix and Donnie to infiltrate a Neolution fertility clinic that Beth investigated. Back at the lab, Cosima and Scott receive a revolting delivery from Alison. As Rachel grows closer to Charlotte, and Susan Duncan leaves a devastating decision in Rachel's hands.

M.K. is shown doing a variety of things: brushing her teeth, doing her hair, web browsing to research Dyad, making a bomb with C-4 and electronics, drawing an organization chart of Topside, with several squares crossed out. Often where she works, she has a picture of a young Leda clone, a woman she often addresses as "Niki".

Siobhan and Benjamin install Ferdinand in a new safe house, as they don't trust him with any other. His offer to get Sarah's bot removed boils down to the idea that Susan Duncan should have the answer they need, and he would like for them to rescue Rachel for him as well. He gives them the message that Rachel got to him out of wherever she is being held, and Sarah will see if someone can backtrack it.

Alison has sent Dr. Leekie's decaying head to Cosima and Scott in their lab under the comic store; they dissect it enough to get out the bot, which seems surrounded by a tumor, that surrounded by necrotic tissue. But now they have a bot to analyze.

Alison meets in a coffee shop with Sarah Stubbs, they've talked in the past of doing a musical, and they think it's time, perhaps the church would be a good venue for Jesus Christ Superstar. After Sarah leaves, a young woman comes up to Alison and complains, "Beth, I told you to drop it, but you're still digging in to LifeSpring Fertility." We recognize her as Trina, who also insists that she's a "consented carrier", and Alison realizes she's been mistaken for Beth; she tries to get Trina to say more, but Trina just wants "Beth" to stay away.

Sarah and Alison talk about the interaction, and Sarah recognizes Trina from her picture. They wonder if, when Trina says she was a "carrier", she meant she had a bot. The next step would seem to be to investigate LifeSpring Fertility; Alison and Felix say they'll get into that. Alison pulls in Donnie to help. Helena is starting to realize that she’s out-stayed her welcome at the Hendrix’s home and Donnie explains that Alison is actually a bit jealous that Helena was able to conceive children, and it was something that Alison and Donnie wanted to do so badly.

Sarah visits Dizzy and asks him whether M.K. has reappeared, and yes, she's willing to make contact. Sarah plugs in the thumbdrive Ferdinand brought into Dizzy’s computer, perhaps M.K. can trace the origin on the message was sent. On M.K.'s system, we finally see the message: "Susan Duncan is alive. I don't know where she's holding me. Help." Sarah doesn't say who brought it.

Alison, Felix, and Donnie park at LifeSpring Fertility, and Alison knows she can't be seen since Beth's already been there, so Donnie and Felix will go in as a couple, looking to be prospective parents. Alison has made up good-looking ID's, copied from real people.

In LifeSpring Fertility, Donnie and Felix check in as patients. The nurse tells them she needs ‘samples’ in order to assess who should be the parent. Donnie is lead into a small room and in order to get some ‘help’, he calls up Alison and they have phone sex. Meanwhile, Cosima and Scott examine the bot and deduce that it’s not actually a living thing, but still very mysterious. In a waiting area, Donnie notices a neighbor, Portia Grossman, visibly pregnant, while Donnie knows the Grossman's gave up on IVF years ago. He phones Alison, who remembers them, the Hendrix's discussed adoption with the Grossman's, so if Portia is 5-6 months along, something is going on.

M.K. gets back to Sarah with the news that the message Rachel sent was destined for Ferdinand, and M.K. knows him as Topside's "wet work" man, not someone she wants anything to do with. So if Sarah and her people are working with Ferdinand, M.K. can't trust them.

Alison arranges to run into Portia Grossman in the parking lot of LifeSpring Fertility, and Alison fakes tears to say, they were trying one more time at IVF, but the doctor there said no. She spends a while trying to pry anything out of Portia, wondering if Portia had any "special" treatment done, and Portia eventually takes pity on Alison and points her to Dr. Bosch, and to ask for the "Brightborn" treatment.

Donnie and Felix have an appointment with Dr. Bosch, who says they seem to be healthy, and should have no trouble conceiving, and is ready to dismiss them when Donnie says they were specifically advised to ask for the "Brightborn" treatment. After assessing them a moment, he gives them the Brightborn brochure and package.

Sarah presses on Dizzy for how to get to M.K., if M.K. won't cooperate, and after a bit of research, figure that M.K. has lots of access to car license plates, and likely is close to a scrap yard. They set out to the scrap yard closest to Beth.

Helena is outside the Hendrix's house, with her nitrogen tank of embryos, and she's realized that the tank needed to be regularly refilled with liquid nitrogen, so the embryos have spoiled. She talks to them for a bit, saying she will tell her twin babies about them, and buries the tank in the Hendrix's back yard. She then says "good bye, family Hendrix", shrugs a pack on her shoulders, and walks away.

Sarah and Dizzy find a camper near a scrap yard, and guess that it's M.K.'s. Sarah gets in by the expedient of breaking a window, and, after avoiding the pressure plate bomb under the doormat, get in. Dizzy sets out hacking into M.K.'s computer, to see what she knows of Susan Duncan.

At Ferdinand's safe house, Siobhan gets a text message from Sarah, to have Ferdinand meet her at Beth's townhouse. There, Ferdinand goes inside to find a laptop showing M.K., wearing her sheep mask. After expressing surprise that Sarah's contact is a sheep, M.K. offers to show him things about Susan Duncan and Rachel on the laptop. He sits in the chair in front of the laptop, and we hear a crunch: there is a bomb under the chair, set to go off if he stands up. M.K. walks in from another room, and removes her mask.

M.K. starts showing Ferdinand a picture show of images from his life, going through his his as a student, soldier, and then Topside hitman.

Back at M.K.'s camper, Sarah finds newspaper clippings, in Finnish, about Helsinki, and they wonder if that's where M.K. is from.

M.K. shows Ferdinand similar newspaper clippings, this time of a car explosion in Helsinki, and Ferdinand recognizes it: M.K.'s accent he labels as Finnish, and "I suspected one clone escaped the purge." He addresses M.K. as "Veera Suominen." She also shows a picture of Niki, the Leda clone we saw in her camper; Niki was her only friend, and Ferdinand killed her and her family.

Sarah is finding the originals of these same clippings and pictures, and realizes what M.K. must be doing. She calls Siobhan, who explains the text that "Sarah" sent earlier. Sarah heads for Beth's.

Having given her justifications, M.K. starts pouring gasoline around Ferdinand and the townhouse, to be set off by candles. As she is doing this, Sarah comes in. She spends a while saying she wants revenge too, but right now Ferdinand is an asset. Here Ferdinand (visibly nervous, perhaps for the first time in the series) pipes in that he has substantial monetary assets, and M.K. knows that too, 3.7 million Euros, M.K. has the laptop ready at his bank's website, all she needs is his password, and he quickly offers it. M.K. types in an order transferring all of his money to her account. Then M.K. walks out, leaving Ferdinand to Sarah. She brings in Siobhan, who has her own experience with homemade bombs, and she defuses it.

Felix and Cosima examine the information on the Brightborn treatment. The centerpiece is a DVD of Evie Cho, a woman Cosima recognizes as a Dyad board member. Evie offers her customers successful conception, easy births, and all of their children will be better than average. 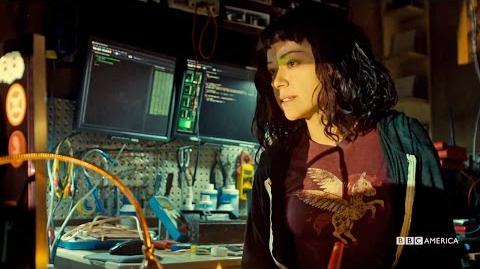 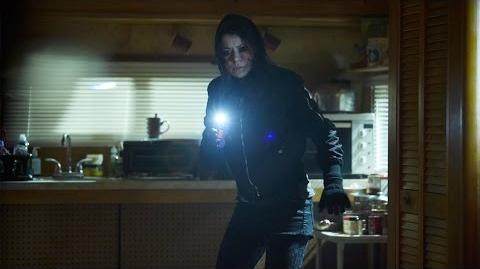 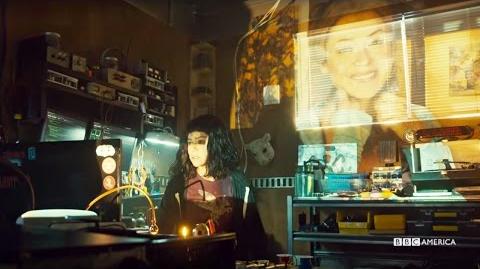 Retrieved from "https://orphanblack.fandom.com/wiki/From_Instinct_to_Rational_Control?oldid=24602"
Community content is available under CC-BY-SA unless otherwise noted.