The Mitigation of Competition

"The Mitigation of Competition" is the ninth episode of Season 4 of Orphan Black.[1] It was watched by 0.291 viewers.[2]

With Susan Duncan deposed, Sarah finds herself in the same position as Rachel — under the heel of a new HBIC — causing the archenemies to come together for the greater good. Cosima and Susan butt heads on the ethical implications of human experiments. Meanwhile, when the Hendrixes' legal counsel, Adele, further investigates Donnie’s case, she begins to suspect Felix is keeping deep secrets. Helena’s arrival forces Felix to make a difficult decision. Elsewhere, Cosima and Susan Duncan continue their search for a cure.[3]

Rachel and Ira have moved to a hotel in Toronto, and Rachel is still having visions of another place: a sky, an outdoor place, men walking, cabins. When these settle down, Ira shows her something on TV. It is an interview with Evie Cho, saying that her hometown Tisdale was run down, and now that BrightBorn wants to build a new research facility, it will be there - and she will be considered a hometown hero.

In a snowy forest, Helena ducks out from a blind, and hunts a deer with bow and arrow. A bit later, we see her carrying the deer on her shoulders, through the forest to a campsite.

Sarah and Felix meet with Rachel and Ira, and discuss Evie's plans. Now that BrightBorn has a new bot, it will sell it for genetic therapy, but the real payload is modifying the DNA of any resulting children. Ira knows of two test subjects, mothers who recently fled the BrightBorn maternity lab, Tabitha Stewart and Kendra Dupree. Evie's people will surely be hunting them, so they decide to get to them first. Art finds that two women checked into a women's shelter yesterday, together.

Evie and Dr. Van Lier look at a video sent to them by email, which shows a BrightBorn doctor euthanizing a defective newborn baby. They recognize that it could ruin their plans, and are searching for the sender. Evie has a press conference to prepare for later at night, so Van Lier gives the job to their minions, Frank and Roxie.

Donnie gets released on bail, and Alison picks him up at the jail. She grumbles about how she's being a fraud at church, she feels she's lost touch with her faith and can't pray anymore.

At Susan's lab, Cosima and Susan fertilize one Leda egg from Sarah with Castor sperm from Ira. Cosima is worn out, perhaps from travel, perhaps not. Susan gives Cosima On The Science of Neolution, by P. T. Westmorland. While vaping, Cosima reads the book and describes the book as "fascinating, for a racist blowhard who thinks poverty is genetic".

Art and Sarah get to the women's shelter, and find it surrounded by police and ambulances. Inside Art finds Trina trying to get answers from detectives. Of the two women, Tabitha Stewart seems to have committed suicide, and Kenda Dupree has vanished. Art examines Tabitha's body, and sees defensive wounds. After he leaves, the other detective calls Evie Cho, to say they are not the only ones looking for Kendra.

In the car outside, Sarah gets a call from Helena, who says she's doing fine, but Helena gets the idea Sarah and the others have problems. Sarah sees Trina and talks to her. Trina is glad to talk to "Beth" and says that Beth was right about BrightBorn, things are worse than Trina thought. She hopes Kendra got away, she spoke of an empty house in her old town, Tisdale.

At the Hendrix’s, Adele looks at Donnie's data from the police, but there's nothing to do for now but comply with bail conditions. Felix notices that there are two police parked outside in an unmarked car, but they can't tell why they are there.

Art and Sarah drive to Tisdale, and check out possible houses where Kendra might be. Rachel calls with some info in case they need to pressure Kendra: the address of where she has her four-year-old son safe with others. Sarah doesn't want to stoop to blackmailing and threatening a civilian, and hangs up, but Ira has gotten Sarah's location, and heads there.

Felix is at his place, trying to derail Adele's questions about Sarah having a twin sister, when Helena walks in, back from the wild, oh, another twin sister. Adele isn't mollified by the attempts Felix and Helena make to quiet her down.

Donnie and Alison have had sex, and afterwards she's bothered. She still can't pray, and is oppressed by the feeling that everyone in town looks down on them, and there are police outside. She says, let's go to Niagara, hide out there in a hotel.

Rachel is getting more visions from her eye, more clear than before: a hunter's camp in a forest, bearded men, rifles, cottages, a swan, and axe.

Art and Sarah find the house where Kendra is hiding, and she is justifiably very nervous about these strangers, after what happened to Tabitha. Eventually she spills: At BrightBorn, we heard rumors that some babies were born different, so we snuck out. As we were going, we heard a baby cry, and took this video of two doctors examining and killing the baby. This is the same video that was sent to Evie. Kendra (who was paid by BrightBorn to be a surrogate) says she ran, and had the baby, who was born blind. Sarah and Art want her to go public on this, but Kendra wants to be left out, she has another son who needs protection.

Sarah calls Rachel about Kendra, and Rachel can't convince her to use the information on Kendra's other son as pressure. So Rachel calls Ira and tells him to do what has to be done.

Sarah again offers Kendra their safe house in Toronto, and this time Kendra agrees. As Kendra goes to a room to pack, Rachel calls her directly, and tells her to go to Ira, outside, or else she'll threaten her other son. Kendra complies, going out the back door. At the same time, someone barges in the front door, and Art stops her: it's Roxie, Evie's minion. Art leaves her for the local police to handle.

As Donnie and Alison are packing, Alison notices that the police car is gone, but there's an ambulance out there, just sitting. She goes downstairs, and Frank is there, with his knife to Donnie,who’s tied-up and gagged. After he ties her up, he gets out a BrightBorn bot, and threatens to stick it into Alison’s mouth, if she doesn't say where Kendra is. Then the door bursts open, and it's Helena with her bow and arrow, who immediately shoots Frank in the neck, killing him and splattering Alison with blood.

Evie Cho practices for her press conference, and as the press starts to file into the room, Rachel comes to meet with her, saying that she has Kendra in custody, and her video too. Rachel doesn't want money, she wants a place on the Neolution board. Evie accepts. Then Rachel asks Evie why (and at this point, we can see that the point of view changed, and we're seeing it on Ira's laptop, with Sarah watching) their doctors were killing babies (we see that the camera is Rachel's necklace). Evie explains that some experiments just don't work, and if even one child were discovered to be defective, the program, and decades of science, would be shelved. Then Evie goes off to the press conference.

The press conference starts, and Evie announces promises of wonderful gene therapy to be made available by BrightBorn. The phones of the reporters there all start ringing, and we see some of them seeing the video of the baby being killed, and some are seeing her recorded answer to Rachel's question. Reporters interrupt Evie's nice speech with hard questions, and Evie escapes the press conference.

Rachel has another vision, of camp fires, a camp, a swan, a cut-off swan head. Now she explains to Ira, this isn't a glitch. It's an image being sent from the island where Susan's house is, someone there is trying to show Rachel something.

In a cabin with a fire and music playing, a woman is working at a desk. A man's hand reaches and touches her on the shoulder, and Delphine turns, gently smiling. 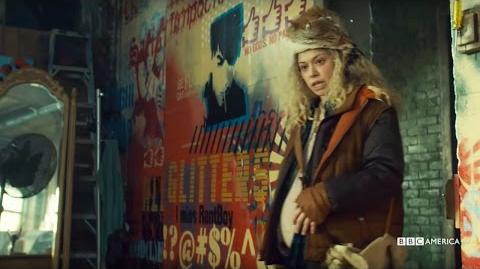 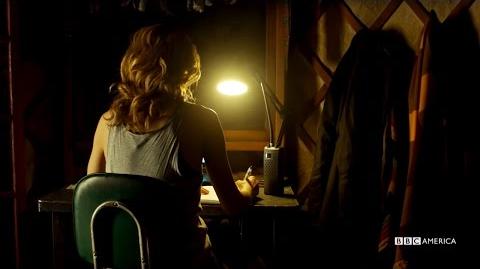 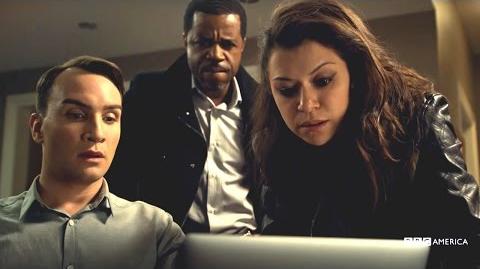 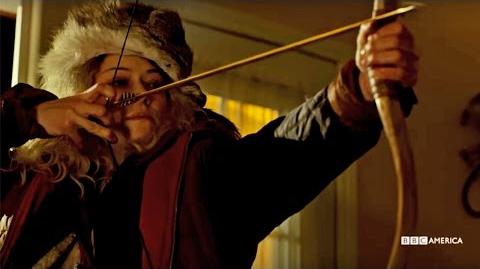 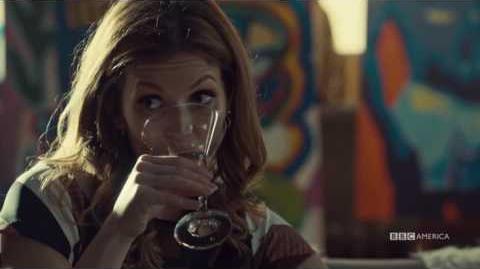 Retrieved from "https://orphanblack.fandom.com/wiki/The_Mitigation_of_Competition?oldid=24709"
Community content is available under CC-BY-SA unless otherwise noted.