The Weight of this Combination

The Weight of This Combination

"The Weight of this Combination" is the first episode of Season 3 of Orphan Black and the third season premiere. The live U.S. ratings for the episode were 0.535. [1]

Sarah pursues the missing Helena who is held in a faraway compound. Sarah must use her wiles – and acting chops – to deter a Topside investigator who threatens the Leda sisters’ lives. Meanwhile, Cosima appears to be rebounding from her illness, while Alison and Donnie face newfound financial woes. But when the menace of Castor rears its head once more, Sarah and her entire family must come together to survive.

The episode opens with Helena at her baby shower in Alison’s backyard with Sarah, Alison, Cosima, Felix, and Kira. Helena is elated, until Helena realizes that this is actually a dream. She wakes up trapped in a crate with a scorpion. The scorpion “talks” to Helena and tells her that she is being tested again.

Sarah, Felix, and Kira are at the beach where Sarah’s “memorial” was held. They send Kira off to play while Felix and Sarah discuss the male clones. Sarah assures him that Marion is handling it, but Felix points out that Marion ran off to Europe. Sarah wants to believe in Marion since she was the reason Sarah got out of DYAD. Suddenly, Delphine pulls up.

Delphine takes Sarah back to Marion’s mansion to talk to Rudy, the CASTOR clone she just met earlier. Delphine tells her how they caught him when he and another clone were forcing a project LEDA clone, Krystal Goderich, into the trunk of a car. Fortunately, they were able to intercept him before Krystal was killed, but the other clone escaped. Rudy will not so much as reveal his name and is demanding to speak to Sarah. Sarah goes to talk to him and discovers that he knows all about her family and life: which clones she’s met, about Felix and Siobhan and and even Kira. Infuriated by this, Sarah threatens him that if he comes near her family, she will kill him. Delphine tells the guards to get her out of the room. As Sarah is being escorted out, he tells Sarah to “count her sisters”. A worried Sarah calls everyone to make sure they are all fine. When Felix and Cosima inform her that Helena hasn’t come back since this morning and her bag is gone too, Sarah realizes that Helena is missing. She tells Felix to meet her at Mrs. S’s place.

As Sarah gets off the phone, she tells Delphine about Helena. Delphine thinks that Helena is not a priority, but Sarah disagrees. Delphine reveals that Topside is sending an investigator to DYAD to assess the security risk posed by the project LEDA clones. The man being sent is a cleaner and cannot find out about what happened to Rachel and so Delphine wants Sarah to pretend to be Rachel when he comes. Sarah immediately declines and walks out.

Alison is at her kids’ soccer practice when Marci walks up to her. Marci tries to convince Alison to vote for her for school trustee. Alison points out that if Marci gets elected, she’s planning to change the electoral boundaries and take their neighborhood out of the school district, which would force her kids to change schools. So, Alison announces that instead of supporting Marci, she’s thinking of running against her. Donnie shows up and informs Alison that he got fired.

Mrs. S. gets home and is attacked by a male clone. Siobhan fights back, but is overpowered by the clone. He wants to find Ethan Duncan, but Siobhan informs him of his death. He demands to know where Duncan’s research is. Siobhan tells him it must be at DYAD and taunts him. Angered by this, he knocks her out and leaves. Rachel’s doctor meets with Delphine, and informs her that although Rachel survived the surgery to remove the pencil impaling her eye, she has sustained some trauma and the extent of damage to her brain is unknown. Delphine tells him about Topside sending a cleaner, Ferdinand, to make sure everything is fine. The doctor mentions an incident in Helsinki, which supposedly even Rachel doesn’t know about, and Delphine tells him that Marion told her all about it and she’s there to make sure it doesn’t happen again.

Felix and Sarah find a beaten up Mrs. S on the floor. She fills them in on the male clone that attacked her. Mrs. S. confesses to Sarah that she was the one who traded Helena for Sarah’s safety. To help Sarah, Marion wanted information on Castor but Paul wanted something in return and so she gave up Helena. Sarah is infuriated, and storms out.

Cosima is feeling better and is now living with Felix. While she is talking with Kira, there is a knock on the door. Cosima answers the door to find Delphine there. Delphine is actually looking for Sarah, since she’s not answering her phone. Cosima wants to know what’s going on and Delphine admits that since she is taking over Rachel’s position she won’t be working with her and Scott. She also tells Cosima that she is keeping her promise to love all her sisters equally, but to do that she can’t be with Cosima. Cosima is heartbroken and shuts the door, leaving Delphine crying in the hallway.

Alison and Donnie go over their financials to see how they’re doing since Donnie is jobless. Donnie is hesitant to take money from their retirement fund, and suggests that Alison go back to work at her mother’s store, but Alison doesn’t want to. Alison admits that she thinking of running for school trustee and Donnie agrees that Marci has to go, “for the kids”. Alison gets a call from Delphine.

Sarah and Felix are back at the beach, discussing Siobhan’s betrayal. Sarah doesn’t want to abandon Helena yet again but Felix admits that he would’ve done the same thing to protect Sarah and Kira. Sarah gets a call from Delphine and comes up with an plan- she’ll help save DYAD if Delphine helps her find Helena.

Sarah meets with Delphine at Rachel’s place, much to Felix’s dismay. But Delphine tells him that Sarah only has to make a brief appearance as Rachel. They come to an agreement that if Sarah does this, Delphine will help get Helena back from Project Castor.

Scott arrives for Cosima’s checkup and she tells him about Delphine’s new role. Scott admits that with everything going on, he doesn’t want to work on the clones anymore. Cosima shows him the book that Duncan gave to Kira with the scribbled notes and Scott deduces this must the key to unlock the rest of the synthetic sequences. Cosima tells him she doesn’t want to share it with anyone else, not even her sisters, until they solve it.

Sarah, dressed as Rachel, goes with Delphine to meet Ferdinand. She tries to excuse herself but Ferdinand requests that she stay for the entire meeting. As they discuss Paul, actually a Castor mole, infiltrating project LEDA, Sarah goes against Delphine’s plan and tells Ferdinand that Castor has Helena. He demands to speak with Sarah Manning, believing that they are still holding her, and wants “Rachel” to accompany them too. They go down to the holding area where they find “Sarah” who is actually Alison. Ferdinand puts on gloves and starts fondling Alison, expecting scars from the oophorectomy. Alison starts reacting toward the unwanted touching and Sarah slaps her to silence her and stop Ferdinand. Delphine tells Ferdinand they need to talk. Outside the holding room, Delphine explains that they had to postpone Sarah’s oophorectomy. Ferdinand accepts this and orders them to return Sarah to her cell. As Delphine leaves, he tells “Rachel” that he will come to her place that night to discuss Helsinki.

As Sarah, at Rachel’s place, is on the phone with Alison and Cosima, discussing the events of that day, there is a knock on the door; it’s Ferdinand.

Meanwhile, Delphine is visiting Rachel in her hospital bed. Rachel is awake, but unable to speak clearly, an affect of brain damage from the incident. Delphine asks her a few basic questions but when Rachel stammers to answer, Delphine forces her thumb on Rachel’s missing eye, torturing the answer out of her. Delphine asks her what she and Ferdinand have planned and Rachel stammers “Helsinki”, despite the fact that Rachel shouldn’t know about it.

At Rachel’s, Sarah is expecting to discuss Helena. But she gets a lot more than she bargained for when Ferdinand tries to get closer to her. However, she won’t give him what he wants and demands to talk about Helena. Ferdinand snaps that their meeting is about Helsinki. He says that Helsinki was Rachel’s decision because if the other clones keep going, they could expose Topside. Ferdinand goes on to explain what Helsinki was: they terminated six clones in Helsinki within 24 hours with 32 as collateral damage. He orders her to kill Sarah as soon as they extract her ovaries, and kill Cosima the next day. As for Alison, the plan to terminate her is already underway- the family will be chloroformed, followed by a house fire. Sarah excuses herself to the bathroom and hastily calls Alison to warn her but Alison is working out and so doesn’t pick up the phone. Ferdinand walks in and demands to know what she is up to. Sarah, as Rachel, claims that she just wants her sister spared, but Ferdinand thinks that “Rachel” is getting nervous about the Helsinki plan because of Kira. Ferdinand gets in her face and tells her that if she is having second thoughts about Helsinki, think of Kira. He claims that he doesn’t recognize who she is right now. Sarah taking matters into her own hands, takes his belt off him and starts beating him with it, which he enjoys. Angry now, she starts to choke him with the belt. She starts pulling too tight, but luckily Delphine arrives in time to stop her from killing him. Delphine chastises Ferdinand that he was supposed to do a security review of self-aware clones, not screw them. After Sarah tells Delphine that Helsinki is happening, Delphine is sure Topside will kill him, not Rachel, if they came to know that he conspired with one clone to kill the others. Delphine tells him to call off Helsinki and report to Topside that the DYAD institute is secure in exchange for her silence on his conspiracy with Rachel.

The man hiding in Alison’s garage, ready to chloroform her, gets a text telling him to abort the mission, just in time to save Alison.

As Ferdinand is led out, Sarah demands to know why Delphine didn’t tell her about Helsinki, since Sarah only helped her to save Helena. Delphine assures her that she is working on finding Helena and asks Sarah to not try anything until they figure out Castor and Sarah agrees.

As the man in charge of Rudy is watching him, someone shoots the man from the back, killing him. The shooter then proceeds to open the jail cell. The shooter is also a male clone and the two clones greet each other and hug. 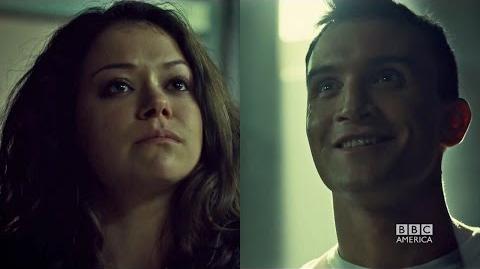 All songs for the episodes have been verified by TuneFind[2]

Community content is available under CC-BY-SA unless otherwise noted.
Advertisement